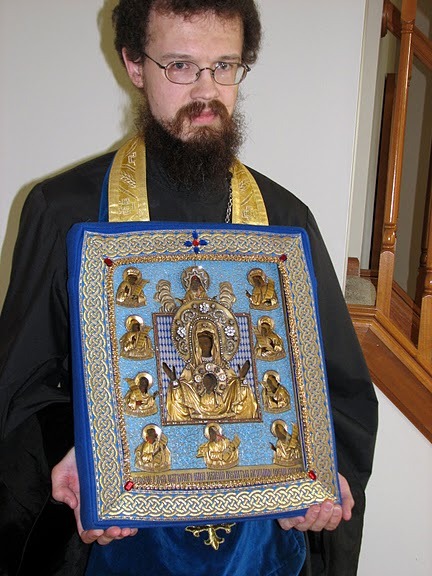 Priest Paul Akmolin was born and grew up in Moscow, Russia. After finishing school in 1992, he immigrated to the United States to attend seminary in Jordanville, New York. While studying in Jordanville, he was taught how to paint icons. Working in the iconography studio in Jordanville become one of his main duties. After finishing seminary, he stayed on in Jordanville and continued to work along other iconographers. He painted many icons for orders received by the monastery and also helped paint smaller frescoes and ornaments at the St. Alexander Nevsky Cathedral in Howell, New Jersey.

In 2004, Fr. Paul was ordained to the priesthood, and was appointed rector of Christ the Savior Russian Orthodox Church in Wayne, West Virginia. While living in West Virginia, Fr. Paul’s iconography business continued to flourish. He continually received orders so that he could provide for his family. He also graduated in February, 2009, with a Bachelor’s in Information Technology from Kaplan University Online.

In 2009, Fr. Paul and his wife, Matushka Bethany, relocated to Cincinnati, Ohio, where they live with their three children. Fr. Paul continues to work as an iconographer, and serves as an attached priest at St. George Russian Orthodox Church.

Visit Us on Google+